What Tv Box Is Better? Three Criteria You Must Know Before Buying

Many users often don’t know much about TV boxes when they buy them for the first time. They search directly according to the brands they know and prefer, instead of using some more professional and systematic evaluation criteria. When the TV box went wrong, I couldn't regret it. Android TV box wholesaler popularizes and reveals some of the most commonly used judgment criteria when buying TV boxes, helping you to choose some of the more convenient TV boxes on the market.

Modern homes are flooded with multiple wireless signals, and mutual interference is commonplace. For example, the necessary WIFI at home, several smartphones, tablets, computers, etc., each device has its own function of sending and receiving signals, which is too much. The signals are easy to interfere with each other, which not only makes the box unstable, but also delays the network speed of the box. The selected TV box must have a strong ability to receive signals wirelessly, so that it can be retracted freely in the wired and wireless state without stuttering.

Household appliances such as TV homes and TV boxes generally do not turn off when they are turned on as long as there are people in the home. In this case, the heat dissipation of the TV box is a great test in the case of long-term operation. If the heat dissipation is not good, it is likely to cause the CPU operating environment to be too high and the work will be suspended. The direct impact is the video freeze and flashback. And such a TV box, basically the product life is very short, which will cause great distress and inconvenience to users.

Good allwinner tv box. In terms of operation of various parameters, the overall performance is not bad. No matter it is online video decoding capability, or signal receiving, heat dissipation, etc., it can work well without affecting the user experience. R-TV BOX X10 PLUS Allwinner H6, equipped with a 4-core 64-bit processor, it has 6K high-definition, very preferential prices and the latest design. With 4GB + 32GB memory combination, support MicroSD (TF), support 2.4GWiFi, 5GWiFi configuration is more prominent in the TV box. 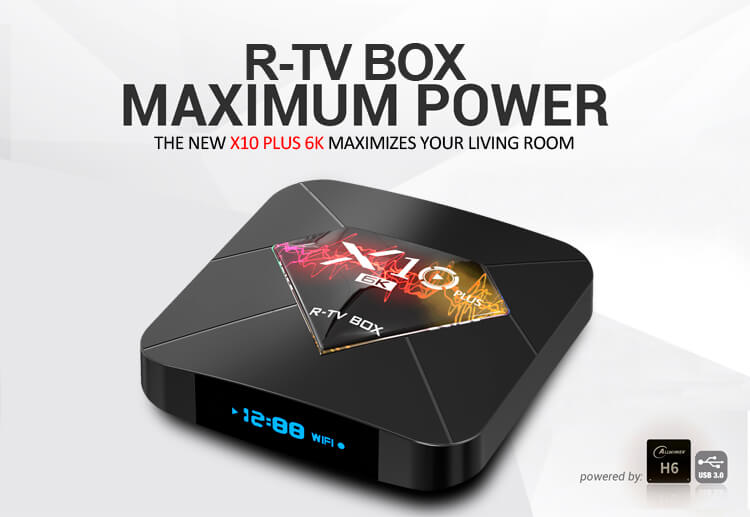 The 4K definition Allwinner H6 TV box still has a size of 115 × 115 × 20mm. It can be easily held with one hand, and the color is red and black stitching. Although the size is not large, the interface on the back is Everything. AV output interface, audio interface, HDMI interface, network interface, power interface, there are two USB interfaces on the side, convenient and not inconvenient. R-TV BOX X10 PLUS Allwinner H6, in line with Chinese usage habits, and improved configuration, super cost-effective!

Previous: Easy To Use And Inexpensive Tv Box

Next: What if the TV box caton?